Let the Lit Slang Out 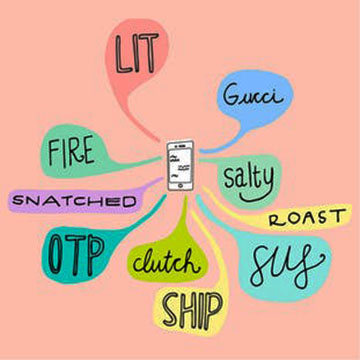 “Why is that funny?”

“Oh my God! I sent that to everyone. I thought it meant lots of love.

LOL is just one example of how every generation has had its own slang language. Just consider all the different ways that various generations have expressed the word “great”: boss, groovy, rad, the bomb, and now today, it’s “lit”.

According to an article titled “20 Examples of Slang Language”, posted on   www.examples.yourdictionary.com, another common slang is the word “fam” which means the person’s group of friends, or just one member of that tight inner circle.

When someone comes and says to you, “I’m dead” or “I’m weak”, don’t think that’s what the person meant. They just mean that something was funny.

“Bae”, is a short word for “babe” or “baby” that is used to call your boyfriend or girlfriend. “Salty” is another phrase, which means you’re angry or bitter about something.

Teenagers use this coded language to create a way to separate themselves from their parents and sometimes to keep them in the dark.  At least that’s what some teens think. Sophomore Thalia Gonzalez said, “I don’t use slang language with my parents because they don’t need to understand our new way of talking.”

Others believe that it is pointless for their parents to know. “They would think it’s stupid and the words won’t make sense to them,” said junior Oscar Pensada.

American English speakers are not the only ones that have their own slang language. “I’m originally from Argentina and some of our slang are “pibe” which means boy, or “tacho” which refers to taxi,” said freshman Valentina Fernandez.

Junior Jenifer Rodriguez added that in her country Chile, when someone asks you for a “pucho” it means they are asking for a cigarette; also, when they say “polola/o”, it means girlfriend or boyfriend. 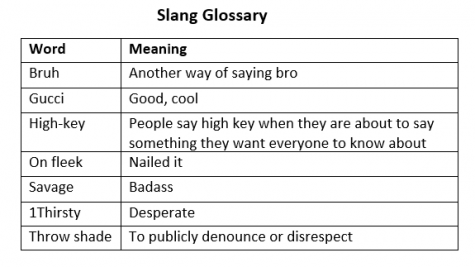 However, if you were raised by Cubans, or have the joy of Cuban friends, you know their language is as interesting as the people. Junior Osmel Amador said, “One of the most common slang words from Cubans are “Que bola?” which means “What’s up?” and “acere” which is calling someone your buddy.”

Although slang allows kids to communicate in a fun, interesting way among themselves, not all teachers will understand what they are saying. “Some teachers don’t like it when we talk like that because they think that we might be insulting each other in some kind of way,” said sophomore Alicia Rodriguez, “which in some cases we do.”

Junior Julio Zoran added that when he talks in slang with his teachers, some of them respond in the same way, but others ask what the word means if they don’t know it.

It might surprise students that their teachers and parents had their own slang expressions back when they were teens. “Teens may think they were the first ones to use a slang expression, but the previous generation probably used it before them,” said math teacher Mr. Strickland.  Thinking back on the slang he used as a teen Mr. Strickland said, “Trippin’ was one of them, and it basically means when somebody is acting up or doing something to make you mad. A second one was dope. Back then people would usually think you were talking about illegal drugs, but for my generation it means when something is good like on point.”

Algebra 2 teacher Mr. Brborich used the word “static” as a slang expression when he was a teen.  He said, “It means when you have a problem with somebody, you get static. For this generation, it would mean “You got beef.”

Is slang just for kids? Do people outgrow slang? Mr. Brborich believes that, “you grow out of words that are not professional.”