Cha Ching! We Got Money! 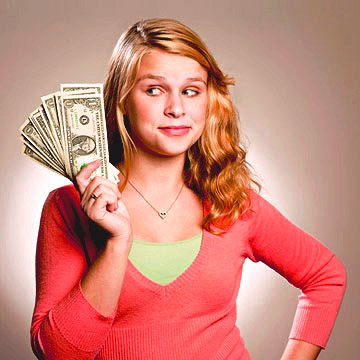 When we were younger, money was just a green piece of paper with numbers that allowed us to get things that we wanted. A single dollar bill made us feel like the richest person. Now-a-days, comprehending the concept of money is vital to our way of living. Earning cash is a small start to handling finances.

Students at MHS have different experiences with earning money. Freshman Tess Berrios earns her own money from allowances and freelancing online. For example, she earns $10 a week from writing song lyrics and being featured in songs belonging to others. “Not much, but a start,” she said.

Sophomore Jade Santiago asks her mother for money, but sometimes sells chocolate candies for $1 around her neighborhood.

Senior Crystal Pavon worked in two local restaurants: Five Guys, earning $10 per hour and Halal Guys, earning $9 per hour. Unfortunately, she didn’t like the environment and quit. She said, “The pay was great, but people were [constantly] being rude.”

Junior Alejandro Laurencio sells themed items and collectibles. He once sold an action figure from an animated series known as JJBA (JoJo’s Bizarre Adventures) for $200.

With the money earned, students now have money to spend. Alejandro invests the money he receives to buy his own car. The rest of the money that he earns goes to “treating family and friends”, even buying merchandise for himself. Sophomore Stephany Bonilla uses the money she obtains from her mother to pay for her “phone bills, class fees, club fees, and the bus”.

Freshman Alain Diaz uses his money for vocal lessons and art supplies such as paint.

Late bills, missed payments, and being in debt are some interference’s that disrupt the goal of financial stability. “[Paying] for food and rent takes a huge chunk of my money,” said Crystal Pavon, who lives with her roommate senior Katherine Arroliga. “Sometimes, I just don’t have money for the rest of the month.” These struggles lead to financial stress. Senior Maria Aldana has a sense of worry due to her not earning much from her jobs: cleaning her house and translating for her father when he communicates with others. She said, “It can feel discouraging, having to think about what, when, and where I should use the money on.”

Making one financial decision at a time is a wise step, rather than “making too many at once and becoming overwhelmed”.
Tracking what you spend is an effective skill to have when managing money.
Identifying your financial stressors and formulating a plan can help you stay on top of debt.

The members of the association suggest calling your bank for any assistance. APA even recommends contacting a psychologist or a mental health clinic if the stress influences your lifestyle mentally and emotionally.

Finance is a significant matter that controls our lives, determining our way of surviving in this world. It is essential that adolescents commence on learning the fundamental factors of managing money. Junior Ashley Yuen learned from simply witnessing the successes and the conflicts that others face. Overall, she has learned that “You should always save as much as you can when it comes to buying stuff.”  Similarly, senior Jonathan Rodriguez was told “that saving money was the way to go” but justifying the importance of saving was something he needed to figure out in his own.

Maria Aldana said, “Having the opportunity to work brings a sense of accomplishment within myself as I prove that my ‘labor’ did have its reward.” She claims that she “has a sense of independence”, knowing she can find a way to provide for herself and others on her own.
Things Miami High Students Do For Money:

>Junior Alejandro Laurencio once sold an action figure from an animated series known as JJBA (JoJo’s Bizarre Adventures) for $200.
>Freshman Tess Berrios earns $10 a week from writing song lyrics and being featured in songs belonging to others.
>Sophomore Jade Santiago sometimes sells chocolate candies for $1 around her neighborhood.
>Senior Crystal Pavon worked at Five Guys, earning $10 per hour, and Halal Guys, earning $9 per hour.