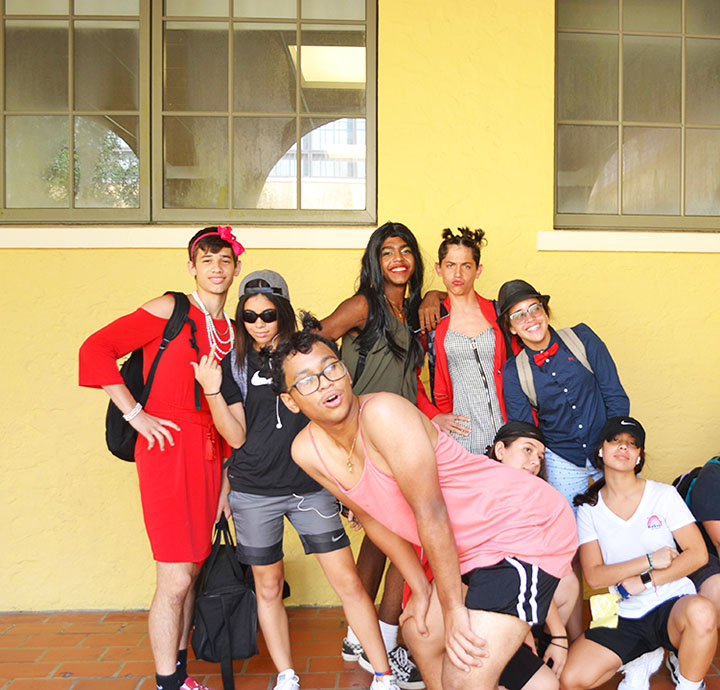 Students pose in front of the cafeteria sporting their Gender Swap Day costumes.

The busiest time of the school year at Miami High has always been Homecoming Week. As clubs prepare to face off in our annual homecoming parade, the rest of the school is busy creating long-lasting memories by participating in our homecoming week activities. Students showed off their outfits for Millionaire Day and Character Day, but the one day that students can’t seem to come to a consensus on as to whether it was appropriate is Gender Swap Day, held on October 23rd, 2019.

Gender Swap Day is a controversial subject to many because it allows for cis-gendered people to participate while not taking transgender and non-binary people into account. It creates room for many internalized stereotypes people have about either gender to be made obvious and enforces gender roles while also excluding people who don’t identify within the gender binary. While many people enjoyed partaking in this activity during homecoming week at Miami High, it caused discomfort to others.

Gender Swap Day first made an appearance at Miami High during the 2018-19 school year and was brought back this year. The Junior Board is usually the one to host homecoming activities and decide upon which ones Miami High Stings get to participate in.

Last school year, after much debate over the appropriateness of a Gender Swap Day by students, Ms. Puentes, SGA advisor, said that many conversations occurred between students and faculty in order to discuss how to include everyone.

She said, “Some students felt that it should be labeled ‘Choose Your Own Style Day’ and that way students would have an opportunity to dress however they pleased, whether that be feminine or masculine.”

However, no alterations to the activity were made between last year and this year. Ms. Puentes stated that the topic remains open for discussion and students can talk directly with Ms. Armas, Junior Board advisor, about any concerns they have.

Do all transgender people view this the same way?

There are mixed opinions about Gender Swap Day even within the trans community. Senior Adam Roque, transgender male and vice president of the Gay-Straight Alliance (GSA), believed the day was supposed to be lighthearted and funny. He considered himself a neutral party in the discussion.

He said, “I felt left out, but I didn’t want to be petty about it. It was funny to see everyone dress as how they perceived another gender.” Roque, however, was not blind to the feelings of other people who were offended by the day.

“It’s definitely exclusive, and participating as a trans person is a double-edged sword because, on one hand, dressing as a girl would trigger my dysphoria, and on the other, dressing as a guy isn’t really swapping genders if that’s how I identify,” he said.

A non-binary anonymous senior felt negatively affected by Gender Swap Day. They said, “As someone who doesn’t identify as either gender, how do they suppose I dress? Gender Swap Day completely ignores the existence of trans people and gender nonconforming people at Miami High.”

Many students, both cis-gendered and gender nonconforming, had troubled feelings towards Gender Swap day. Senior Yasmine Valverde, who states that she identifies with her assigned gender identity, believes that this particular day allowed for students to dress up as how they view the opposite gender using exaggerated stereotypes.

She said, “Gender Swap day also ignores that gender is a spectrum – not binary. It excludes trans and non-binary people while also ignoring the issues they face on a daily basis.”

Senior Melissa Magalhaes, also cis-gendered, participated in Gender Swap day but felt “kind of bad” afterwards. “I just wanted to draw a beard on my face for fun, but later I realized that the day was insensitive,” she said.

Liosdan Gonzalez, senior and SGA second vice president, participated because he thought it was a fun day that was supported by both male and female students. “Some girls even volunteered to do my makeup,” he said. “There was no tension between me and anyone else over me dressing up as a girl that day.”

Transgender – An umbrella term that describes people whose gender identity and/or gender expression differs from the sex they were assigned at birth: A term used to describe people who identify as a different gender from the sex they were assigned at birth.
Non-binary – People who transcend commonly held concepts of gender through their own expression and identities. Other terms for this might include gender expansive, gender creative, or genderqueer.
Gender binary – The idea that there are two distinct and opposite genders––male and female.
Gender nonconforming – Having a gender expression that does not conform to gender norms.
Cisgendered – A term that describes a person whose gender identity aligns with the sex assigned to them at birth.
Dysphoria – A distressed state arising from conflict between a person’s gender identity and the sex the person has or was identified as having at birth.