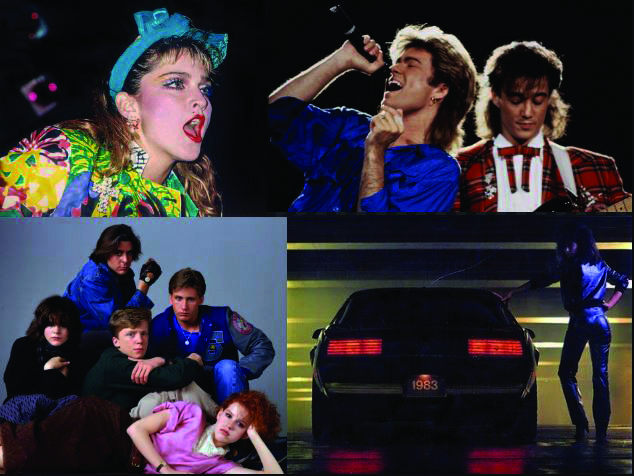 Photo Collage by Sofia Solis with images from: women’sfashion.lovetoknow.com, Overblog.com, Theguardian.com, and Caranddriver.com Madonna, George Michael’s pop duo Wham!, and some movies such as The Breakfast Club will always be remembered as the faces of the 80s.

If you put it into perspective, 40 years is a long time ago. Have you ever wondered how different life would be as a teenager during that time? People who were young adults in the 80s have now reached past their middle ages and have seen the world change and progress since then.  Some have raised children and watched them grow into young adults. They have seen and experienced the youth go from neon car-crazed, Madonna-discotheque-obsessed to the Tweeting, EDM-music-festival, ‘Insta – sharing life of the youth today.

Some say that besides the huge difference in music and pop-culture, there are many more differences than what’s playing on MTV. Miami High’s Digital Design instructor Mr. Torossian, who graduated from Coral Gables Senior High in 1984, says that every generation has its own gaps.

He says that today’s youth has an upper hand in multitasking, but he notices a lack of focus in today’s youth, whereas back in the day, unless you had somebody sitting next to you constantly bothering you or a window to stare off into, it would be impossible to be constantly distracted.

In addition, students back then wouldn’t keep focused by popping a Vivarin or an Adderall unless they were prescribed. If a student wanted to succeed back then in academics, they would really be committed to it. Now, a lot of our youth is distracted by social media, and ADHD medications are easier to get.

Mr. Torossian adds that the need to focus on an academic goal for teenagers today isn’t as prominent as it was back then. He adds that in the past, there was more pressure on going to college and making a career out of a degree, whereas today there are more options on how to grow financially thanks to the internet.

On the other hand, Miami High assistant principal Mr. Zabala, who graduated from Coral Park High School in 1982, claims that the youth today isn’t that different from his day. However, he adds that it is easier for young people today to engage in bullying since social media opens the doors to new ways of bullying others.

The youth back in the 1980s socialized differently than today’s youth. Chess and automotive instructor Mr. Bello said that since today’s teens have way less physical interaction thanks to the internet, teenagers right now have the power to share their lives with thousands of people online and may confuse those people with friendships.

He considers that a lonelier lifestyle than back then. So, teenagers right now would probably stay home and chat with their “friends” than go outside and meet up with local people. He adds, “Students right now are living in their own little world. If you look around, you’ll only catch about three or four students talking whilst the rest of the class is on their phones.”

Everybody was at the game

Back then, and up until the late 90s, high school sports were the leading entertainment for teenagers. English teacher Ms. Anderson, who graduated from Miami Springs Senior High in 1997, said that everyone’s craze in school was directed towards the football and soccer teams, and hundreds of people would attend the games.

In fact, chemistry teacher Mr. Ceballos, who graduated from Miami High in 1981, said that the basketball games would often be so sold out that people wouldn’t fit in our gym, so they’d have to hold the games at bigger venues.

The 1980s through the Miami High Times

Another way to investigate what was true for teens in the 80s is to review past copies of the Miami High Times.  It seems that life for students back in the 80s was very school-centered. Many shared their opinions in the school newspaper rather than nowadays through social media.

In 1988, the U.S. Supreme Court ruled on January 13th, 1988, that students publishing school newspapers do not have the same freedom of the press as adults do.  Many students believed this to be an absolute violation of their First Amendment rights. The Miami High Times covered this issue.

Students shared their outraged opinion about this topic by drawing political cartoons and sending letters to the Miami High Times’ editor as a protest. Former Miami High principal Mr. Diego Garcia Jr. is quoted saying that the Miami Dade school district and Miami High would not be bound to follow the Supreme Court’s ruling.

To see what life was like in Miami High throughout history, you can access past issues of the Miami High Times online through <https://www.miamiseniorhigh.org/apps/publications/index.jsp?parentREC_ID=0>