Coronavirus, Not The “Chinese Virus” 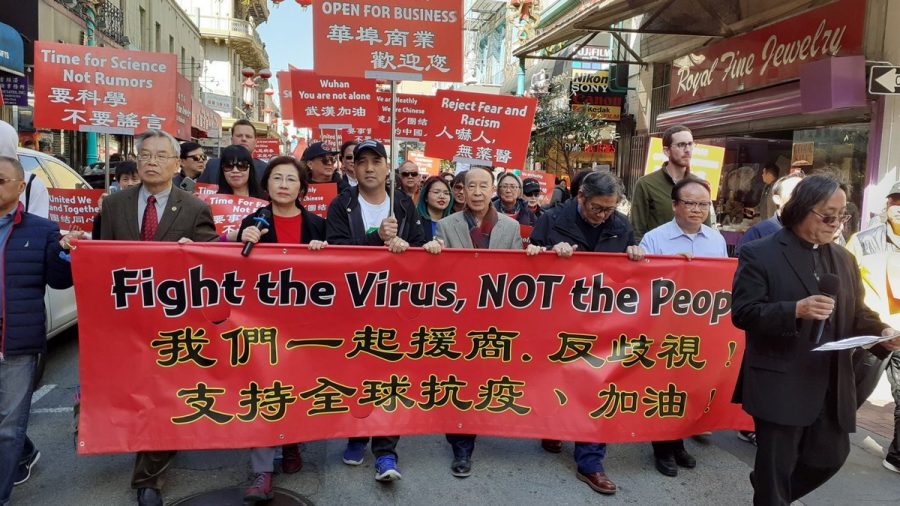 (Source: https://www.liberationnews.org) Chinese residents in San Francisco's Chinatown rallied to show support for the Chinese community, as a result of the increased anti-Chinese racism.

The Coronavirus, officially known as COVID-19, has spread across the world, and the United States is now the country with the most known cases. It originated in Wuhan, China, and it has been hot on the press and the main topic of conversation. The spread of the virus caused many school districts to shut down, including Miami-Dade County.

What Do You Know?

According to the United States Centers for Disease Control and Prevention (CDC.gov), the Coronavirus is more contagious than the flu, and is reported to spread through human contact and contaminated objects. It has been making huge headlines globally across all news sources, which do not always report similar information regarding the virus; consequently, everyone’s knowledge of the virus is different, making it difficult to know what to believe is true.

Some students are well-informed. Sophomore Marco Perez-Vazquez believes that it is a global pandemic, and it’s causing a lot of social conflict. “The 2020 Olympics was cancelled as a result of the virus, and flights between the United States and Europe are cancelled,” he said.

Senior Brianna Delisle said, “It is a respiratory illness similar to the flu. There have been different strains of the coronavirus, which has been around for a long time.” Senior Thais Maradiaga adds, “Finding a vaccine is difficult because coronaviruses are hard to replicate in laboratories and they mutate quickly. It also disproportionately affects populations with weakened immune systems.”

The Coronavirus is causing world-wide panic, as people are clearing grocery stores’ aisles. There is a shortage of toilet paper, hand-sanitizer, napkins, masks, etc.; however, is the virus as bad as the media is portraying it to be?

Before students were sent home from school, many of them were not so alarmed. Junior Kiara Delgado said, “The only people who should be quaking in fear are old people and people with bad immune systems.” Junior Nathalie Saladrigas adds, “Media tends to exaggerate in order to get more views, like click bait. Coronavirus is the number one thing people are talking about, and if people are actually informed, I think they’ll realize it isn’t as bad as it’s made out to seem.”

On the other hand, Marco Perez-Vazquez believes it should be taken seriously. “If a cure has not been released, then the general populace can’t access treatment.” Law teacher Ms. Perez said, “I think it’s good to be safe and be precautious. I also think that we live in a news frenzy culture and it adds to the panic, but the fact that there is no vaccination and the way it attacks the lungs, it’s something to be worried about.

As a result of the public’s frenzy, the government has been debating whether there should be a nationwide lockdown. Thais Maradiaga said, “Given that Covid-19 has become a pandemic, I think the government should respond in accordance to what health organizations say. While I believe there should be a multilateral effort from world leaders to contain the spread and provide care, I think health professionals should be at the forefront of the conversation.”

Junior Isaac Sanchez said, “It is vital that the government assess this pandemic with urgency and efficiency in order to contain the spread, and return the world back to normal operations because the virus is affecting our economy and trade. However, I do not think the government share my urgency simply because there isn’t enough testing being done in the United States; instead they claim the virus is just blown out of proportion and just a ploy to make the president look bad, but without enough funding going to testing, how can individuals know if they are infected considering the virus can affect each person differently?”

The Coronavirus pandemic isn’t only generating fear of being infected, but it’s generating fear towards Asians resulting in racism. President Trump has never failed to remind people that the virus started in China through his speeches and on his twitter.

This pandemic is allowing people to be more open with their xenophobic feelings. According to The Hill, a Washington D.C. publication that focuses on the government, many government officials have been calling the Coronavirus the “China Virus” or “Chinese Virus,” when viruses don’t have nationalities.

The best way to understand Coronavirus-based racism is to hear first-hand experiences from Asians students at Miami High. Senior Ashley Yuen said, “People in public have avoided me, and seemed scared of seeing me.”

Senior Rigil Dalagan said, “It happened to me when I went to Presidente Supermarket. I overheard people saying ‘chino’ while maintaining distance from me.”

On the other hand, senior Billy Nguyen said, “I may have heard some Coronavirus jokes, but I don’t take them seriously.”

However, other students at Miami High have witnessed situations where racism is being targeted at Asians. Junior Amanda Sanchez said, “I have seen more racism towards Asians as many people know that the virus originated in China and assume that all Asians must have it, discriminating them to being the ones at fault for this virus.”

Thais Maradiaga said, “I think people have been more comfortable dropping their microaggressions in favor of much more overt biases now that they have some kind of ‘scientific’ or ‘pragmatic’ ground. I heard someone call the Covid-19 the ‘oriental disease.’”

Isaac Sanchez said, “The real fuel for racism is fear. It’s part of human nature to attack the unknown, and in times as uncertain as these, we need a scapegoat– someone to shoulder the blame for a pandemic– and those sadly are Chinese people just because the virus was born there. It is easier to hate and shame than it is to help and understand.”

The media is a prominent part in today’s society; it’s a powerful tool which can be seen in history. The Coronavirus is blowing up all news sources making all headlines, but some of it showcases negative feelings towards the Chinese community, which can skew some peoples’ ideas. Nathalie Saladrigas said, “Ideas of racism against Asians are spread so easily online and people just adopt these ideas. Out of anger, most people will share hateful ideas and blame others for things that are out of their control.”

Junior Karla Peralta said, “The media does play a part in the spread of racism with the way they word their headlines and the images they link to their articles. An article by the New York Post told about the first Coronavirus case in Manhattan, but the photo they used for their headline was an Asian man in Queens. The actual case came from a 30 year old non-Asian woman who visited Iran, but they decided to spread the photo of that Asian man with the headline. This comes from the writer and news site’s own ignorance on the matter and feeding onto the fears of the people who will see that headline and photo. The spread of such imagery of Asian people equal Coronavirus is one leading reason why so many Asian communities, businesses, and people are targeted as a danger and treated as a threat.”

How do we stop thousands of people from expressing their racist beliefs? Students at Miami High believe human action, education, and compassion are the best ways to stop racist beliefs from spreading. Senior Keilyn Delgado said, “The best way would be to acknowledge that anyone could have the disease, and it’s not just Chinese people. Be compassionate towards others, and stop panicking; it’s making you more paranoid than actually helping you.”

Ashley Yuen said, “Educate people about the virus, and show its true self instead of overexaggerating it. Show that the Chinese are working hard to cure those that are ill.”

Junior Rosario Barraza said, “Educate people to understand the ignorance behind the jokes made about the Coronavirus and the people affected.” Kiara Delgado said, “Stand up for [Chinese people] and correct people whether in person or on the internet when they say something you know is wrong. By staying silent you are feeding into that bias.”

Brianna Delisle said, “Stop blaming people for our own mistakes because all we do is play the blame game since no one wants to assume responsibility. I think we should all attempt to be a little bit open-minded. We keep forgetting that in China, these people are also affected by the Coronavirus, and that people are losing their own family members. We should attempt to be more empathetic. Finally, stop listening to radical people with radical beliefs.”

I am Chinese-American, and people have told me that I’m going “overboard,” for speaking out against racism because it’s “not that deep,” so I shouldn’t take it seriously. But when your little sister’s nickname is “Coronavirus” at her school, that’s a problem.  Or when your mother is in a meeting and a coworker, to her face, says something discriminatory against Chinese people, that’s wrong. Or when some of your mother’s patients refuse to go near her, or when your brother’s students are making Coronavirus jokes and mocking Chinese people, shouldn’t someone speak up? Why should my voice be silenced, while some narrow-minded Americans  are permitted to show hatred towards people of my ethnicity? Why is it OKm for people to turn their fears into racism, but my fears turn into tears?

Whenever I leave the house, in the supermarket, people are always staring down at me. I encountered a man at a store who called me and my mom Coronavirus. I can’t sneeze or cough in public, especially since I’m Chinese. I’m too scared to go out in public, and whenever I do, I’m looking at the ground, moving fast so I can go back home. I already have bad anxiety, but when I’m in public, it’s worse than usual.. People in school were  making even more “Asian jokes” to me, and it made me uncomfortable. My name is Annette, not Coronavirus.

It is not new for Asians to be targeted by people and the media, as the idea that Asian racism is OK is planted in many peoples’ minds. The majority understand it’s wrong to be racist or make jokes towards Blacks and Hispanics, but it’s OK to make fun of Asians.

Racism has been something I have experienced my entire life since I was four. It’s something I have dealt, but I now think it’s time for people to be educated on how Asian jokes are still harmful, especially during the pandemic. When we get mad we are “too sensitive,” and need to “calm down.” Why should we calm down? Why can’t we be treated with respect?