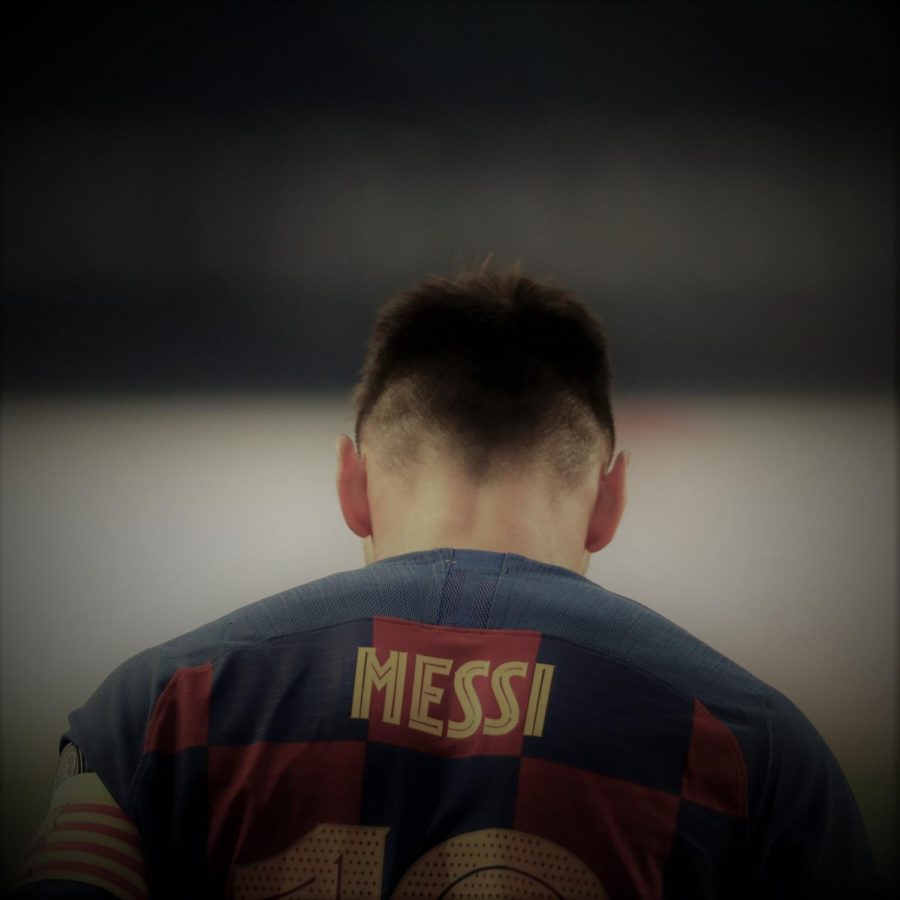 Messi looking down in disappointment after suffering a humiliating defeat to Bayern Munich in the Champions League (Source: https://www.nytimes.com/2020/08/25/sports/soccer/lionel-messi-barcelona.html)

Lionel Messi is known for being one of the greatest soccer players of all time, playing for the club named FC Barcelona his entire life and scoring over 600 goals. However, after a few disgraceful seasons at the club, he decided during the summer of 2020 that he might want to leave.

Although Messi has played for FC Barcelona his whole soccer career, he wanted to transfer to another club. Although it’s not for certain why Messi wanted to leave, there are many speculations. For instance, FC Barcelona fan and junior Brian Costilla said, “The club didn’t have a sporting project, and Messi didn’t seem happy about that, since he wanted to win another Champions League trophy before retiring.”

On top of that, according to the article titled “Why does Lionel Messi want to leave Barcelona?” published by Goal, Messi “Questioned whether the club president Bartomeu and the board had done enough in their efforts to bring Neymar – a player he enjoyed playing with – back to Camp Nou.” Neymar was one of Messi’s best teammates when it came to playing soccer as they won the champions league together and had the best seasons together with him.

Lionel Messi, an Argentinian, is known as Leo Messi or simply, Messi. By the age of 13, Messi was a top soccer talent in Argentina but was considerably smaller than most of the children he played alongside. According to the article titled “Who is Lionel Messi”, posted on the website Biography, Messi was diagnosed with “a hormone deficiency that restricted his growth.”

The medication that was required to treat Messi was nearly impossible to pay for as Messi’s parents did not have the money. This led to Messi moving to Spain after soccer club FC Barcelona agreed to pay for his medical treatments after impressing the club with his extraordinary soccer skills.

Messi went on to be known as one of the greatest players in the history of the club, winning countless trophies. One of Messi’s career accomplishment is being the first player to earn 6 Ballon de Or’, which is an international trophy that is awarded each year to only one player for their outstanding performance for that season. Another achievement that Messi has surpassed with the club of FC Barcelona would be winning 4 UEFA Champion League trophies, which is awarded to the club that competes and overcomes the top-division European clubs.

Other than being a soccer player, Messi leads a family of 5, including his wife, Antonela Roccuzzo, and his three children, Mateo Messi, Thiago Messi, and Ciro Messi. Messi also has a dog by the name of Hulk.

Although Messi’s goal was to leave FC Barcelona in the summer of 2020, his contract stopped him from doing so. According to an article titled “Lionel Messi can only leave Barcelona if €700m release clause is paid” published by Sky Sports,  “La Liga has bolstered Barcelona’s stance, with the club insisting the clause has expired and the only way Messi will be allowed to leave is if his €700m release clause is paid in full.” In other words, if Messi wants to leave, the club that was interested in buying him would have to pay the full €700m clause since he wasn’t free of his contract and agent.

Some say that a man, single-handedly, can’t destroy an entire club; however, here stands Josep Maria Bartomeu, who has destroyed FC Barcelona since his arrival as president in 2014. In an interview with Goal, ex Barcelona-president Laporta states, “It’s very difficult to have any feeling with Bartomeu.  Because he is a person who, with his attitude, he has Barca kidnapped with intoxication, with lies… and on top of that he is a president who is facing charges, so in that respect he isn’t very trustworthy.”

Senior Andie Fortozo, a Barca fan, adds, “Since the arrival of Bartomeu, it seems like Barca has been having some bad matches like when we lost 4-2 to Roma in the Champions League of 2018 after having a lead in the first match.”

Messi’s Importance to his Club and La Liga

Lionel Messi is an extremely important player, for both his club and La Liga (the league he plays for) for many reasons. For instance, Brian Costilla, a Barca fan, said, “Messi makes the difference when it comes to playing against tough teams. Messi goes on to scoring goals that will win games for the club.”

According to an article titled “Why can’t La Liga afford to lose Lionel Messi?” published on the website Barcaunviersal in 2020, “Lionel Messi leaving Barcelona will heavily affect much more than just Barça. Messi leaving will affect La Liga immensely as well as the fans watching the Spanish league.”

Many people and different newspaper articles have different opinions as to where Messi would go if he were to leave FC Barcelona. According to an article titled “Paris Saint Germain: Linking back up with an old friend” published by the Insider, “If he [Messi] does leave Barcelona, Messi’s other option is to move to French champions and Champions League runners-up Paris Saint Germain.”

Jose Reyes, a long time Barca fan, said, “I think that Messi would most likely want to move to Manchester City, as his best Argentinian friend Kun Aguero and the best coach he’s ever had, Pep Guardiola, are there. There he’d be able to accomplish what he’s been looking for: another Champions League trophy before he retires.”

Since the possibility of Messi leaving his home club came to reality, it has been compared to when former Real Madrid star, Cristiano Ronaldo, left for Juventus. According to the article titled “Differences and similarities between the goodbye of Cristiano and the possible exit of Messi” published by FC Barcelona Noticias, “Cristiano Ronaldo left  Madrid in the highest, but Leo Messi would leave backwards to a Barça submerged in a worse crisis.” Because of the big losses that Barcelona has suffered in the past years, Messi would be leaving his club in a bad sporting position, compared to when Cristiano Ronaldo left, Real Madrid had just won one of the biggest leagues in the soccer world, the Champions League.

The Conclusion to Messi’s Disaster

After weeks of Barcelona fans suffering because of the possible departure of Messi, it was confirmed in September that Messi decided to stay in his home club. According to an article titled “Messi’s Barcelona heartbreak revealed: From his son’s tears, to refusing to go to trial – full truth behind ‘brutal’ transfer saga” published by Goal, “Messi has accepted he must stay at Camp Nou to avoid dragging his beloved club to court, but only after experiencing a desperately sad couple of weeks.”

Senior Alejandro Valdez said, “I’m glad Messi stayed because without him the club would become more of a mess than what it already is.” Senior Rafael Rodriguez added, “Even though I think it would’ve been better if Messi had been sold to use that money to buy new young talents, I’m glad he stayed in the club he loves the most.”