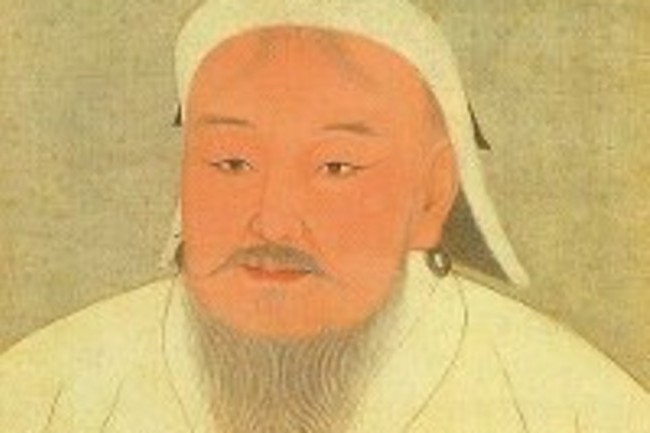 Genghis Khan as portrayed in a 14th-century Yuan era album; now located in the National Palace Museum, Taipei, Taiwan. The original version was in black and white. (Source: https://en.m.wikipedia.org/wiki/Genghis_Khan)

Cancel culture is a huge issue in 2020. Celebrities make one mistake on social media and there’s instantly a mass of people wanting to ‘cancel’, shame, and humiliate these celebrities on the Internet. The last person to be ‘cancelled’ is someone you’d never expect, and it’s none other than the Mongolian warlord Genghis Khan. But why is the internet calling out this historical warlord?

Who was Genghis Khan?

According to History.com Genghis Khan rose from a humbled beginning to establish the largest land empire in history from the early 10th century all the way to the late 11th century. After uniting the nomadic tribes of the Mongolian plateau, he conquered huge chunks of central Asia and China.

Many people were slaughtered in Genghis Khan’s invasion, but he would also grant religion freedom to his subjects, abolished torture, encouraged trade and created the first international postal system.  Genghis Khan would inevitably perish in the year 1227 during a military campaign against the Chinese kingdom of Xi Xia. His final resting place remains unknown.

On August 14th, 2020, Genghis Khan, who died almost 800 years ago started going viral on Twitter. It all began when a Twitter user by the name of @Priya_27_ started a ‘thread’ tweeting about the devastation caused by Genghis Khan. Later on, the Twitter user began calling out people who glorify the warlord.

@Priya_27_ said, “Genghis Khan did to central Asia what Islamic invaders did to India, maybe worse. He single-handedly killed 11% of world population at the time… yet some want to glorify him as a hero conqueror. That’s your personal choice but objectively, Genghis Khan was a barbarian.”.

Cancel culture is a real problem.

Cancel culture is best explained as a boycott on a person. It is mostly used to publicly shame a person who shared a questionable/unpopular opinion. It is also used against people whose past behavior is unethical, illegal, or wrong.

Although cancel culture started off as a way for people to bring justice to an issue, it has changed overtime with people who are too quick to judge and inevitably end a celebrity’s career. Even former president Barack Obama has warned about the dangers of cancel culture: “That’s not bringing about change. If all you are doing is casting stones, you are probably not going to get far.”

And as political commentator, media host, and attorney Ben Shapiro said, “Cancel culture is just the mobilization of fake armies on Twitter, who don’t care about these issues. They’re here to bother people in order to ruin their businesses simply because the mob doesn’t like what they say.”

Things you may not know about Genghis Khan

Some of his most trusted generals were his former enemies.
“Genghis” wasn’t his real name; he was originally named Temujin which means “iron” or “blacksmith”.
Genghis had over 500 wives, Börte was his first wife.
About 0.5% of the world’s population can trace there