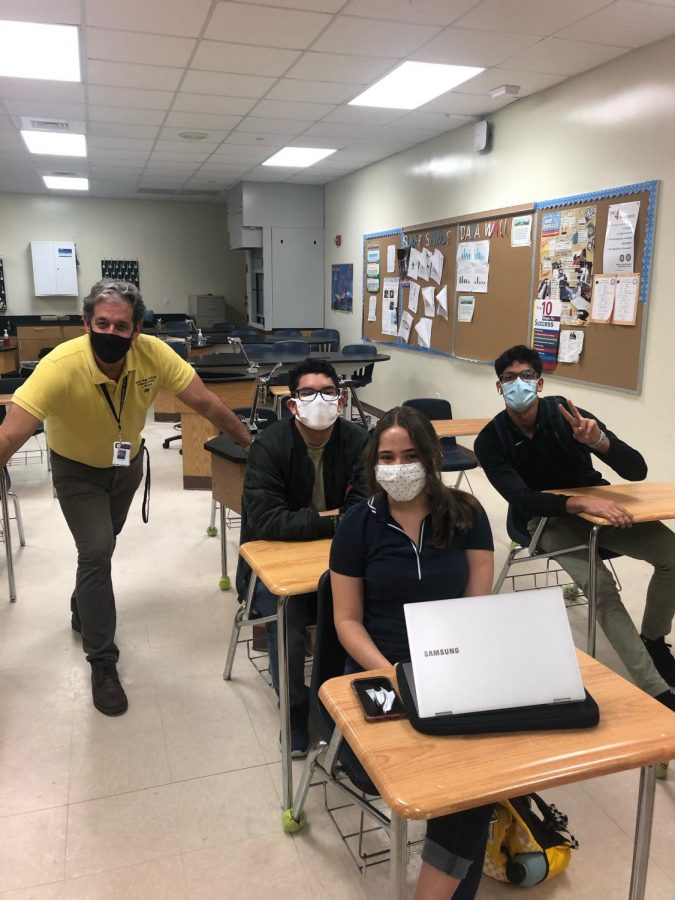 Mr. Rivera next to his Physics students.

Mr. Rivera is one of the most hardworking teachers out there. He loves to help students learn, and it brings him joy when they understand. Although there were some hardships in his life, he still managed to accomplish his dreams, becoming a high school physics teacher.

Born and raised in Cuba, Mr. Rivera lived with his loving mother and father. During his childhood, his parents’ home was taken away by the government forcing them to move in with his uncle. Their economic situation at the time wasn’t the best but it was enough for their necessities.

As he grew up, he quickly realized his spirit for learning and teaching when he was a monitor during high school. Mr. Rivera mainly enjoyed mathematics and physics.

His mom was one of his academic influencers. She worked as a pharmacist, investigator, and professor at the University of Havana, and Mr. Rivera decided he wanted to be a professor as well.

In 1984, Javier Rivera graduated with a bachelor’s degree in education associated with Physics. He worked as a professor for 6 years and a teacher at the Spanish Institute of Havana. After teaching for 17 years in Cuba, in 2001, he and his wife decided to leave their beautiful land behind and move to Miami, Florida.

For some time, Mr. Rivera worked hard to learn the English language. After many weeks of studying, he became fluent in the language. In 2003, after passing all the requirements for teaching at a public school, he joined the faculty of Miami Senior High School. He felt very welcomed by all the staff especially the former principal’s secretary, Amalia Rodriguez, and students.

As of now, Mr. Rivera teaches Physical Science, Physics, and AP Physics. He is the one and only teacher to teach this subject at Miami Senior High. As a teacher, knowing that his students can understand his way of teaching makes him very proud.

Trying to make every lesson a success

Mr. Rivera doesn’t have a favorite lesson to teach. For him, it is hard to decide because for each lesson he develops a way to help students understand thoroughly. Every time his students understand the difficult topics, he feels a sense of relief and satisfaction. He annotates the way he was teaching to be able to use the same strategy in the future.

Jonathan Corrales, a junior taking AP Physics, says, “What I think makes him different from some of the teachers I have or had is that he always tries his best to make sure everyone understands. He always asks after every problem whether or not you have questions about what he just did and always expects an answer from us. He also leaves most, if not all, of the work we did in class on a page in OneNote. He even has other resources to help you understand better like PowerPoints or workbooks with the answers on the back. This kind of goes hand in hand with the previous question so again, he’s very patient when it comes to teaching. I have him for AP Physics this year so things are a little bit more fast paced than honors physics, but he’s still very patient and makes sure everyone is on the same page.”

At times, when test results come back, it isn’t always the best possible. Mr. Rivera feels disappointed because he feels like he wasn’t able to teach correctly. When that happens, he goes back and reviews with the students on the Promethean board. He always offers more help even after.

Physics is not impossible to learn

Something that Mr. Rivera wishes people understood is that “physics is not some impossible topic to learn.” Physics falls into the STEM branch. People that want to learn must be focused so that they can keep moving forward. He says, “When this doesn’t happen it seems like learning it is an unattainable goal.” Students that express their troubles give off the impression that it’s the hardest topic ever, when it’s not.

Ever since 2005, Mr. Rivera has been trying to fight this stereotype and prove it wrong. When he first started teaching, he only had 2 physics classes, but right now he teaches 6 different physics classes. It was possible for him to achieve this with the help of other teachers that push their students to learn new things. Mr. Rivera just wants more students to be interested.

Sarahí Rodriguez, a junior, says, “He very student centered, he’s always making sure we understand the lesson, and is willing to help us when we are lost. He makes lesson interesting, and the way he teaches really helps me understand what the subject is about. He makes physics look fun in a way. He’s a great teacher and everyone should take physics.”

Overcoming challenges in the classroom

One of his biggest challenges as a teacher was learning how to use the Promethean board. Mr. Rivera was one of the first teachers to use one in 2005. He was so used to using a regular whiteboard that it became difficult to learn all the new technology.

When workshops were available to him to learn the basics, he went and tried his hardest to remember everything that was taught. He continued to learn and experiment with it. Mr. Rivera is glad he can give his students the best lessons possible.

As a teacher, one of his greatest accomplishments was guiding his daughter through school. Mr. Rivera’s daughter did not know English but with the help of her father, she learned very quickly. She soon graduated from Miami Senior High and Florida International University as well.

—
Getting to know Mr. Rivera