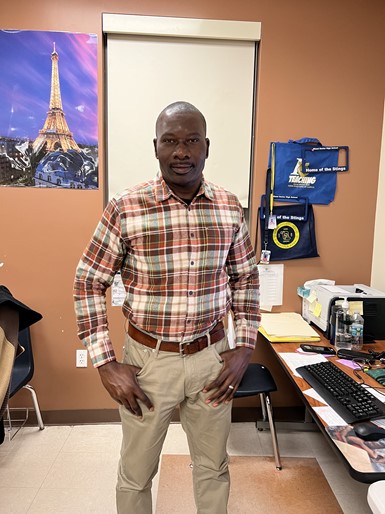 "A teacher's goal is for their students to achieve more than them." - Mr. Fertil

Many students might not know who Mr. Fertil is, but you should! He has been voted for teacher of the month numerous times. His French students appreciate Mr. Fertil for his teaching and  his emotional support for them.

Mr. Fertil vividly remembers his first day of preschool. He recalls his father walking him to  school as he explained what a school was and what he was going to learn. Arriving at school, 5 year old  Mr. Fertil noticed his dad leaving; that is when he elbowed his teacher and ran off crying after his dad.

After that first day of school, however, he connected rapidly with his peers. He explained how soccer was “an incentive for us little boys.” His fondest memory was playing soccer in tournaments. Although his mother was frightened to let him play, his teachers did not give up on trying to convince Mr. Fertil’s mother, because they witnessed the talent and passion that Mr. Fertil played with.

He mentioned, “I was raised in a traditional household that believed in family values.” Until this day Mr. Fertil still holds these morals close to his heart: respect, discipline, and family.

When he was eighteen, Mr. Fertil moved to the United States from Haiti. He recalls it not being easy at first, but with time he got accustomed to the new culture and environment. Mr. Fertil wishes that more Americans could acknowledge Haiti’s rich history, being the world’s first black-led republic to gain independence from French colonizers.

In the Classroom with Mr. Fertil

Being raised in a multilingual country, Mr. Fertil is a French teacher who is also fluent in Creole, English and Spanish. Parents do not have to worry about their English when it comes to speaking to Mr. Fertil due to his multilingualism.

Teaching for 17 years has brought pride to Mr. Fertil for supporting and helping students achieve their best versions of themselves. Mr. Fertil has created a welcoming environment for his students. “When I step into the classroom, I see the students as my own children,” he explained.  He advises students to “have friends, but be careful of those friends that lead you astray.” He also wants to advise students to not give up on themselves so quickly.

In his French class students  do not only practice grammar and pronunciation, but they also can become pen pals with French students. Pen pal is a person with whom one becomes friendly by exchanging letters, especially someone in a foreign country whom one has never met. Some of his students who have participated as pen pals are  Emily Rodriguez, Genesis Velasquez, Kimberly Escobar, Isaiah Tehedas and Maria Devalos. They started by exchanging emails and then have  moved forward with social media.

Mr. Fertil has many passions, and one of them is traveling. “I love to travel. God willing, I will visit at least 2 or 3 countries in each continent,” he said .He has already  traveled to the Caribbean , New York, California and Mexico.

Friday night it’s Mr. Fertil’s time to show off to his family his cooking techniques. He mentions, “I feel fulfilled when I am able to sit together with my family, whether that be sharing a meal or doing an activity together.”

Mr. Fertil was born Catholic, but converted to Christian when he was fourteen. The Christain life has shaped who he is and what he does. It has transformed him into a forgiving person. He went on to say, “God has been good to my family and me. We believe in the birth and resurrection of Jesus Christ.”

Two years ago Mr. Fertil created the Culture Circle Club. It is a club  where students can come and share their culture, and where club members can learn about their classmate’s culture and customs. Everybody is welcome to join. The club participates in every school activity. If you would like to join, go to room 3122.

Mr. Fertil was born in Haiti
His favorite food is a Haitian stew called Legume
He has been teaching for 17 years
Mr. Fertil is the only French teacher at Miami Senior High
He speaks over three different languages