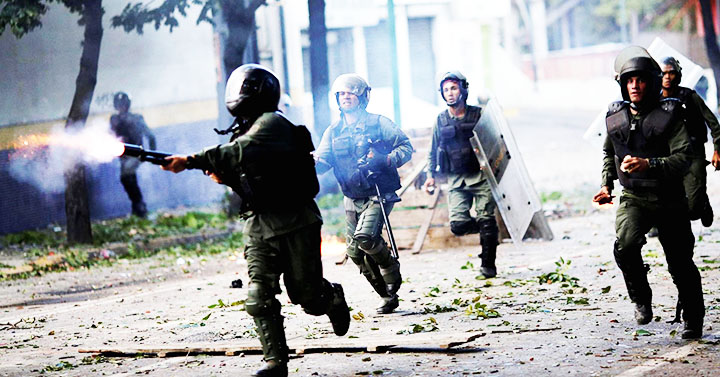 The Truth About Venezuela… FROM SOMEONE WHO LIVED THERE

Ten years ago, if you heard the word “Venezuela”, you would have thought it was an African country. Venezuela was known in Latin America for their petroleum reserves, but if you lived outside of it, you probably never heard anything about us.

Seven years ago, if you met a Venezuelan in a foreign country, after the word ‘Venezuela’, you probably would have been confused, but after seeing the Venezuelan tiredly sigh and mutter with shame the word, “Chavez,” everything would have made sense. “Ohh, THAT country,” you might have thought.

Five years ago, however, a lot of things changed. On the 5th of March of 2013, Hugo Chavez Frias, better known as Venezuela’s president, died of cancer, and left our current president Nicolas Maduro Moros in charge. After that, the country’s decline accelerated becoming what it is today.

Nowadays when you hear ‘Venezuela’, you automatically think of the words; ‘Maduro,’ ‘Communism,’ ‘Socialism,’ ‘Crisis,’ ‘Poverty,’ and ‘Protest.’

I was born in Maracaibo, Venezuela, and lived there for the first fifteen years of my life; in that time I also lost my dad who was a crime victim in 2008.

At the beginning of 2016, when my family started to receive threats of extortion, we had to close the chain of restaurants we owned. Little by little, all of my aunts, uncles and my mom included, started leaving the country to look for an alternative place to live, leaving all my cousins and me with our grandparents.

My mom came to the United States in October of 2016, and started working and sending money to us in Venezuela. On December 8th of that year, I got onto a plane with destination to Miami. Before I left, I told everyone I wasn’t coming back because I knew the probabilities of me going back were very low.

For instance, when my mom told me to ask for my transcripts from my school “just in case,” in my gut I knew. The original plan was that I was spending Christmas here and then would go back to Venezuela and graduate there.

When it was confirmed by my mom that I was staying, it was really sad for me, realizing that the life I was used to in Venezuela, wasn’t my life anymore. I wasn’t going back to the school where I had spent almost 9 years of my life. I wasn’t going to be back to my house; I wasn’t going to see my abuelita anymore, my friends, my family.

I am not the only Venezuelan who has left the country. In fact, I am a small part of “The Bolivarian diaspora,” which is the largest recorded refugee crisis in Latin America and refers to the voluntary emigration of millions of Venezuelans from the country.

According to Newsweek, the “Bolivarian diaspora is a reversal of fortune on a massive scale” where the “reversal” is meant as a comparison to Venezuela’s high immigration rate during the 20th century.

Venezuelans were asked by the polling company ‘Datanálisis’ if they desired to leave their native country. In December 2015, over 30% of those asked were said to be planning to permanently leave Venezuela. This number nearly doubled months later in September 2016, with 57% of respondents wanting to leave the country. By 2018, about 4 million Venezuelans had emigrated from Venezuela.

I asked many of my Venezuelan friends from Miami High what was the story of them leaving the country. When the words “Why did you guys left the country?” left my mouth, they all looked at me as if my question was dumb.

Venezuelan sophomore Daniel Liota laughed bitterly before saying, “Apart from the obvious? Is the humanitarian crisis not enough reason for leaving the country? You never find anything, and if you find it, probably you won’t have the money because everything is so expensive right now.”

Venezuelan junior Daniella Vargas said, “My mom was involved in political protests and later on we had problems. Pro-government collectives would go to our home and try to break in.”

Venezuelan freshmen Jesus Duque said, “The quality of life here is so different from there. I don’t have to worry because they are cutting the electricity at 4 p.m. or I don’t have to be paranoid about being assaulted whenever I leave my house.”

In some ways, it is strange that Venezuelans now need to leave their country, because we have everything we need in our country: we have beaches, mountains, forests, and jungles. Plus, we are producers of coffee, cacao, rice, sugarcane, rice, corn, mangoes, and a lot more. If this doesn’t seem enough, we have reserves of petroleum, gold, and diamonds.

Most of the well-functioning manufacturers in Venezuela used to be private, but they were expropriated by Chavez when he was still president. Sadly, when the government took command of these industries, everything started to fall apart.

Since 2010, there have been shortages of essential products such as milk, meat, coffee, rice, oil, precooked flour, butter, medicine, toilet paper, and other personal hygiene products. The government blames this on civilians, saying that when the products arrive, they buy everything compulsively. Stores are often forced to fill shelves with miscellaneous items to create a false sense of being fully stocked.

The reality that Venezuelans are facing right now is harsh. Salaries are one million Bolivares per month, but one dollar is worth seven hundred thousand Bolivares, and the ‘Basic Food Basket’ costs about thirty-five million Bolivares. This results in people being unable to afford food, gas, clothes, and every first-hand product you can imagine.

A lot of Venezuelans have died from the lack of medicine and material in hospitals, and many more are in a critical condition because they can’t find or afford what they need.

A lot of countries have offered economic help to Venezuela, which has been rejected by the president who says that they are not having a humanitarian crisis, because if he admitted it, the Organization of American States –or OEA for short– would have reasons to do a political intervention, something that the government has been avoiding since 2015.

Mandatory electricity cuts have existed in Venezuela since almost a decade. At the beginning it was only 2 or 4 hours in three days of the week for rationing, but since last year, those have gotten worse. In 2016 the government said that the ‘Guri Dam’ Hydroelectric Plant was suffering from a drought, but after the rainy season in 2017 it still “hasn’t recovered.” Right now, many cities in Venezuela are spending from 12 to 14 hours without electricity on a daily basis.

Poverty have never been so high; there are a lot of people eating from the garbage. The rates of kids dying from malnutrition are alarmingly high, according to doctors, but no one says how high they are.

The changes in Venezuela, however, are more than economic. Now the government is changing the school curriculum, and replacing classes like biology, art, English, and history, with classes like Obligatory Military Instruction, Agriculture, and Native Indigenous Languages. They are giving books to elementary kids teaching them about communism and Chavez’s life practically sanctifying him.

Every day I see from the outside how my country gets worse and worse, feeling powerless for not being able to do anything. I am worried sick about my grandparents, who cannot come because they don’t have passports. Talking with my friends and hear them complaining about the electricity cuts, them not having food in their houses, or getting assaulted, I feel guilty because I’m living in better conditions than them.

What did you think of this story? Would you like to see more stories like this? Tell us what you think in the comments below!

If you want a picture to show with your comment, go get a gravatar.