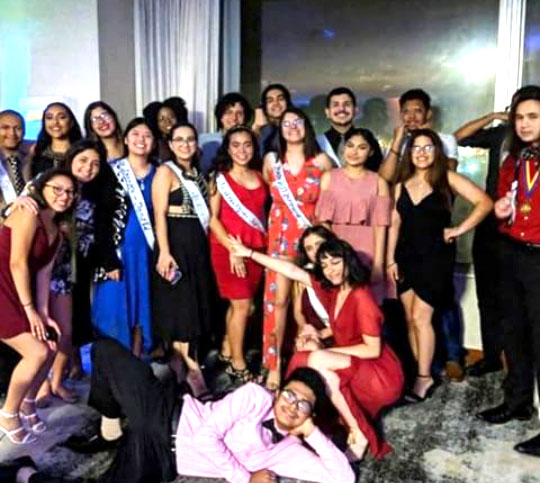 Choir members taking a silly photo on June 4th, the day of the first Choir Banquet!

Choir director Ms. Cid has made her second year at MHS worthwhile for all her students. She is recognized as “Master Cid” or “Mama Cid” within the MHS choir community.

Sophomore Mariah Moran sees Ms. Cid as her second mother that has helped her grow as a person and as a musician. “She has a really big heart and tries to help anyone she can to succeed in life,” said Mariah.

Senior Diana Aleman loves Ms. Cid’s energetic personality and her motivation engaging kids into various events. “She’s great at what she does, and her endless support really motivates us into doing bigger and better things in the future,” said Diana.

Senior Katheryn Gallo, who connected with Ms. Cid by becoming her choir officer, said, “Her determination to build her program inspired me to do better. She’s one of the most caring teachers I’ve ever had.”

I have always loved singing since I was a young girl. I joined choir because singing has always been my top option for my career. I knew that choir would teach me musical content that I rarely received a chance to learn.

My first experience was exciting. I knew most of the content, and I was welcomed by Ms. Cid and the other beginning choir students. Personally, I believe I have a connection with Ms. Cid. Before the Florida Vocal’s Association competition, I rehearsed with Ms. Cid and another instructor.

I began to cry because I was embarrassed at the fact that I was the only freshman participating. Somehow, Ms. Cid helped me realize how special I was and that being a freshman wasn’t as embarrassing as I always thought.

Everyone has their own intentions for joining choir. Junior Lucia Ona joined because she knew it would help her “develop and improve my technique [in singing].” She also felt like “it would be an amazing community to be a part of.”

Sophomore Mariah Moran and seniors Diana Aleman and Katheryn Gallo joined for their passion for singing. Sophomore Ashley Yuen made the choice of staying, doubting choir at first.

Our first experience with choir helped us determine the devotion we had towards music. Freshman Jade Santiago wanted to switch the choir elective because she believed that she couldn’t sing, but after giving choir the fighting chance, it “became my favorite class.”

Mariah Moran was quite shy to sing until Ms. Cid guided her to open up. Similarly, junior Jonathan Rodriguez was scared and confused at first with the previous choir teacher Dr. Kuenze. But as time passed, choir has helped build his confidence.

Many choir members were happy to see their passion for singing grow. Jonathan Rodriguez said, “Over time, my musical abilities have improved immensely and my love for choir has grown to the extent that my future career is to be a choral/piano instructor.”

Senior Nayib Jorrin “wouldn’t have ever gotten the courage to try singing” without the encouragement of fellow choir member Jason Albisu. Jason, who is a senior, said, “Singing in a choir helped me find my own voice and grow.”

Everyone in the choir community expected this elective to be just a regular singing class. In the end, however, it resulted in a family, filled with hilarious memories, various singing sessions, and admiration for music. In summary, we will miss the Class of 2018, but expect major plans for this program in the next few years. Watch out MHS, while our choir makes a stand!

What did you think of this story? Would you like to see more stories like this? Tell us what you think in the comments below!

If you want a picture to show with your comment, go get a gravatar.